Cooking up a Storm in Dubai This article was originally published in the June edition of Building magazine.

Dubai’s Storm is the world’s first rollercoaster integrated directly into the structure of the building – an engineering triumph that gives thrill seekers the ride of their lives.

Dubai takes the concept of anchor attractions in shopping malls to pull in the crowds to a new level. Those visiting the Dubai Mall can enjoy one of the world’s highest observation decks at the top of the Burj Khalifa among other treats including an Olympic-sized skating rink and an aquarium. Other malls feature indoor skiing on real snow as well as the usual cinemas and restaurants.

In Dubai, shopping malls are the place for people to meet, eat and be entertained because it is too hot outside for large parts of the year. This explains why Dubai, a city of three million people, has 65 shopping malls covering an area of more than five square kilometres.

Given the density of malls and range of attractions on offer, a new mall needs something special to attract people. The Dubai Hills Mall opened in February this year and features what is believed to be the world’s fastest vertical launch, taking riders up to a speed of 77kmph within just 50m. Called the Storm, there is much more to this rollercoaster than launch speed; the Dubai climate dictates this attraction is indoors but this doesn’t limit the size as it features a 670m long track packed onto a 45m diameter footprint. 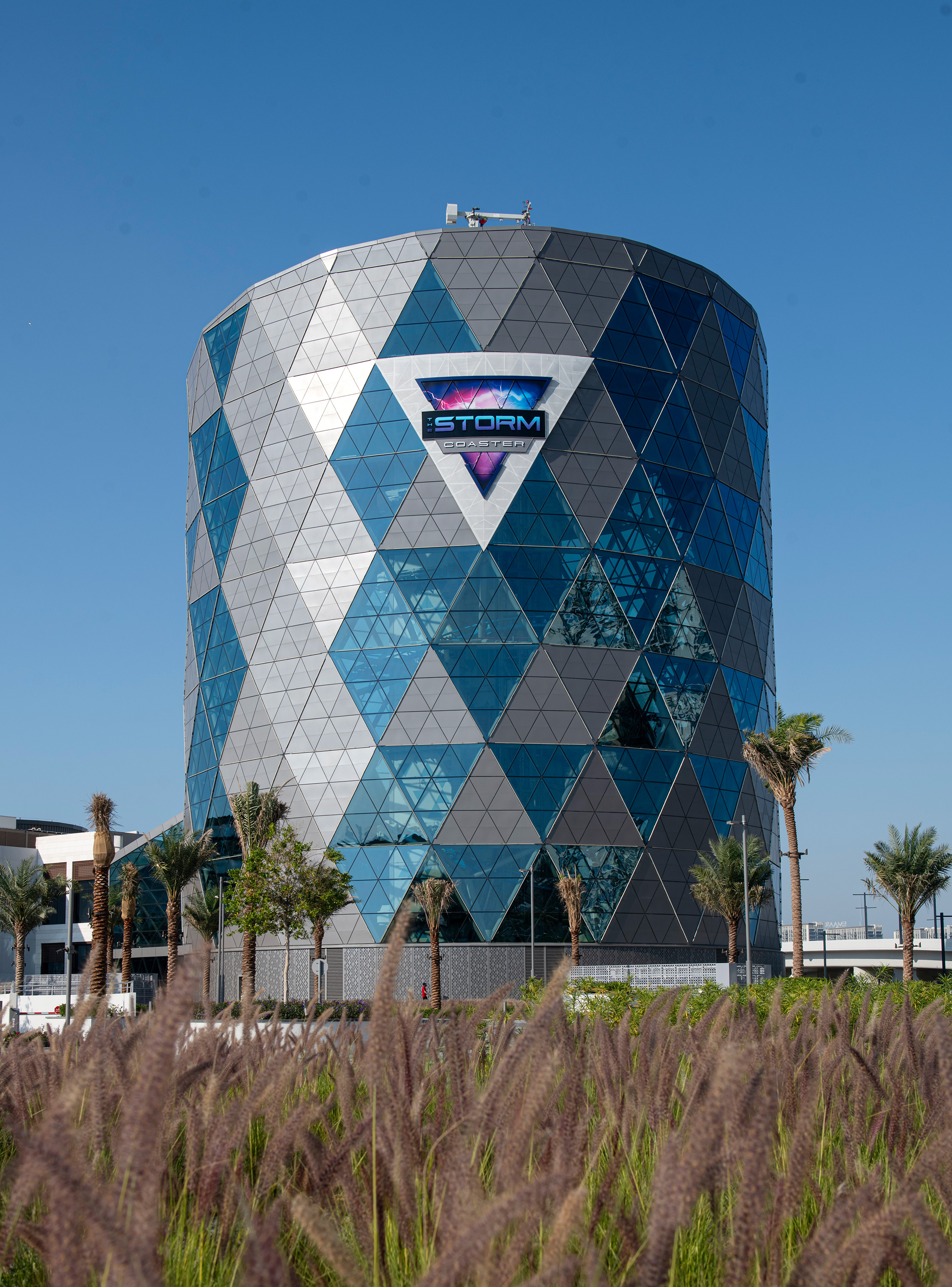 The Storm has a second distinguishing feature: unlike other indoor rollercoasters, which are freestanding structures inside a shed, the Storm rollercoaster and building are integrated into one structure.

“There are a lot of indoor rollercoasters but nowhere where the coaster is the building and is one system,” Perey says. “And this size of coaster, in such a small footprint, hasn’t been done before."

Integrating the Storm’s track into the building structure presented the team with a unique set of engineering challenges. The ride starts at ground level in a car holding 12 people. A linear synchronous motor, which can be likened to an unrolled conventional motor, fires the car vertically to its maximum speed of 77kmph 50m up, which is the top of the ride.

From here gravity takes over; the car winds back down, taking in four loops of the circular building and twisting and turning, including upside down as it descends. There is a hold position before it shoots downwards. In all, the ride lasts just one minute and 20 seconds.

The track is fixed to the inside of the circular building’s structure. This has the big benefit of eliminating half the amount of structure needed for a conventional indoor rollercoaster, where ride and building are independent. Perey says this approach meant the building design was dictated by the engineering.

“This is the first time I’ve worked on a building that is 100% engineering rather than architecturally governed,” he says. “The requirements of the rollercoaster governed everything – the position of the station, the building diameter, the slope of the roof. Everything was how do we make the structure as efficient as possible?"

What makes this building structure different is that it must be capable of taking the dynamic loads imposed by the speed, direction and weight of the rollercoaster car and its passengers which are coming from all directions. These are on top of usual building loads such as wind, thermal, seismic and dead loads.

The building must cope with these loads with minimal flex as this would negatively affect the track. “What makes this different, by putting a coaster into it, the building is governed by stiffness,” explains Perey.

“Very rarely is stiffness the governing factor in a structural design. The movement of the building was critical because the rollercoaster track has limits in terms of differential movement between the supports along the track. They are only allowed to move a certain distance so the overall building has to be very, very stiff so that the track doesn’t warp.

“If the track warps, this puts additional strain on the coaster wheels and energy is lost through friction. And overall, it isn’t permitted in the overall design criteria.”

Making the building completely rigid so it did not move at all would be very expensive and require a lot of material. By allowing a minimal amount of movement the structure can be lighter.

Perey says Cundall worked closely with the rollercoaster engineer, Intamin, to optimise the building and track design so that there could be a degree of differential movement which would not negatively impact on the track.

The team was constrained by the position of the track supports fixed to the building sides. The locations were dictated by having to maintain a clearance between the person sitting in the rollercoaster car and any building element equivalent to the length of an arm plus an extra safety allowance.

Perey says there were 261 different load cases generated by the rollercoaster, which had to be overlaid with seismic, wind and thermal load cases. There are 120 connections between the track and the building structure and there are six different types of force on each of these points. This is equivalent to a total of 187,000 combinations which were parametrically modelled and analysed. Any change to the design by structural or rollercoaster engineer could potentially affect all these combinations. This meant close co-ordination of the structural and rollercoaster analysis software combined with weekly updates which ultimately paid off.

“Through iteration, and the parametric modelling, we put the building to the edge of what the limit of the track was,” Perey says. He adds this modelling reduced the amount of steel needed for the structure by 23% compared with the original design concept.

The structure is a diagrid formed from steel tubes 457mm in diameter with wall thicknesses up to 16mm. Each diagrid is 6.5m high with 20 connection points on the base. The track is supported from the diagrid by struts arranged as tripods terminating in bolted connection to the sectional steel tube carrying the track.

The track leaves the building sides at the base as part of a loop, and when the car comes into the station, it brakes to a halt. This introduces differential, dynamic loading between the structural diagrid and the foundations, so the slab has been integrated into the piles without any movement or expansion joints to enable it to resist those loads.

Other unusual challenges presented by the rollercoaster included vibration and noise. “We are putting a moving coaster weighing thousands of kilograms inside a building so one of the key design criteria in the façade design was vibration,” Perey says.

The team considered ETFE pillows as these are flexible and lightweight but were discounted because of durability concerns – there is very little experience of ETFE in the Middle East. A semi-unitised glass and aluminium façade was selected; this is connected to the structural frame via rubber mounts which absorb vibrations generated by the rollercoaster.

A rollercoaster enclosed within a solid cylindrical building which reflects sound back to the centre is a recipe for a very noisy experience. The façade is 50% solid aluminium panels which include an acoustic lining to deaden sound and the soffit is covered in acoustic panels too. Maintaining a comfortable temperature in the desert heat was critical, so the building features a central, non structural core with six plant levels. Double stacked air handling units on each level blow cool air outwards towards the façade.

The solid façade panels help to reduce solar gain; the glass panels may look randomly positioned but are in fact biased so these are adjacent to the track to give passengers good views out. Temperatures are allowed to rise near the top of the building to reduce energy use.

“When the patrons are in the top five metres of the building, they are only up there for four seconds. So, if it is a couple of degrees warmer, they are not going to feel it when you are moving on a coaster quite fast,” Perey explains.

Passengers start their journey in the mall, where they buy tickets and enjoy a short audio visual show. From here they pass into the Storm building and get into one of three cars at ground level ready to be fired up into the air for the start of their ride, oblivious to the sophisticated structural engineering that has made the Storm such a thrill seeker’s success.